justashadowonthewall
Please leave all sanity at the door.

Skyfall is the twenty third James Bond film in the spy series directed by Sam Mendes and serves as a marker for the fiftieth anniversary for the franchise.

Honestly, I’ve never the biggest fan of Bond around but I generally enjoy the movies and something about Skyfall’s trailers sucked me in immediately and made me anxious to actually see what was going to happen. So now, for your eyes only dear reader, here is my verdict on the latest Bond film.

The plot begins, as one might expect now from a Bond film by now, in the middle of the action, perfectly setting up the tone of this action thriller. James Bond, codename 007, is on the hunt for a data drive containing the identities of British undercover operatives. From the very first scene of the movie, one thing is perfectly clear. The camera work in Skyfall is simply extraordinary. Unlike some mindless action films that employ a violent shake of the camera or rapid uneven cuts during the action, Skyfall’s camera work flows brilliantly from scene to scene, using a type of class that reminds the audience exactly who they are watching.

That is not the only strong factor of Skyfall, however. The plot is also worthy of note. Where as other Bond films have had Bond taking on cataclysmic odds against forces threatening to plunge the world into nuclear war or commit nefarious plans to break into Fort Knox, the plot of Skyfall is a far more personal problem for Bond. Admittedly, whilst Bond does spend a bit of the film travelling to exotic locales, as one might expect, the focus of the movie appears to be kept solely on MI6 and Britain in general. This change of focus, however, is for the better, allowing for a greater amount of suspense and drama through out the movie’s third act.

Daniel Craig is simply magnificent as Bond, perfectly capturing the spirit of the spy on her majesty’s secret service, but also expressing a sense of age behind his character that is integral to the film’s plot. Judi Dench is also impressive reprising her role as M for the movie, remaining extremely intense in the role through out her performance. However, my own personal congratulations are reserved for Javier Bardem’s portrayal of the film’s main antagonist: Raoul Silva (pictured below). In a film series which has hosted a variety of iconic villains, Silva still manages to stand out from the crowd because of the passion and enthusiasm that Bardem brings to his performance. The rest of the acting within the movie was solid as well.

Skyfall’s humour, I shall also note, is brilliant, bringing a smile to the face and taking a laugh from your lips without dragging you away from the plot. Not to be outdone by the comedy of the film, Skyfall’s action scenes are a true marvel to be hold as well. It is truly a rare experience for all the parts of one film to fit so beautifully together and work together to make the film itself even more outstanding.

In conclusion, with plenty of continuity nods for the veteran fan and a truly well written and well paced plot for the average movie goer, Skyfall manages to surpass all expectations, becoming a truly amazing film watching experience. 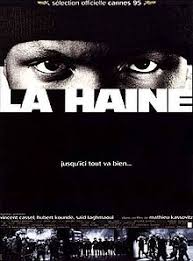 There are few films in the world that I would say are masterpieces, considering the fact that I am not much of a film expert myself.

However, if I could be permitted to name one film as a masterpiece, a true classic, it would without a doubt be La Haine.

La Haine is a 1995 black and white French film written and directed by Matheiu Kassovitz. The plot of the movie follows a day in the life (technically, nineteen hours in the life) of three second generation French immigrants who live in a ‘Banlieue’ (a type of housing estate found on the outskirts of a city). As we accompany them in a trip through their world, weaving through the brewing riots in the Banlieue, we get an in-depth glance into the world viewed by the impoverished and the underprivileged waging war on a world where all the cards are against them.

The first thing I believe is worthy of note about La Haine are the characters. All of the characters in the film, even the occasional side characters, are well defined and all maintain a sense of individuality. Despite starting off as stereotypical rebellious and uncooperative teenagers, the three main characters, Hubert, Saïd and Vinz all develop beyond their initial roles, each becoming a likable and interesting character as the film progresses. Hubert, for example, is first introduced at his gym (which has recently burnt down) where he is pummelling a punching bag. At first, I suspected that this scene foreshadowed that Hubert was a rather violent and angry character. Surprisingly, this was not the case. Hubert shows the most maturity out of the three main protagonists, wisely picking his battles and aspiring to eventually leave the Banlieue behind and make something of his life. La Haine loves playing with expectations and I found myself enjoying the film because of its unpredictable twists. 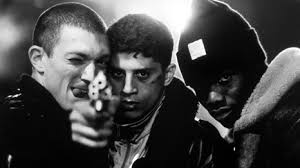 (From left to right: Vinz, Saïd and Hubert)

It is through these well crafted characters and their seemingly aimless journey that Kassovitz is able to explore far more controversial social and cultural themes. La Haine, as the title may imply, is a movie about hatred. Unsatisfied at their treatment, the underprivileged riot against the police, which instils hatred on both sides. Interestingly, La Haine is not a film with clear cut heroes and villains. Both the police, rioters and, for that matter, our protagonists stand in a morally grey area. This further reinforces the main theme of the film, which is perfectly described by Hubert as being ‘Hate begets hate’. Kassovitz also draws attention to how ignorant the rest of the world is of hatred by constantly utilising the words ‘So far so good’, implying that as long as everything is going alright for someone; they don’t care about the senseless hatred around them.

La Haine is also a movie in which symbolism is used to great effect, though admittedly, sometimes I felt as if the film was trying too hard to get me to pay attention to the clever uses of its symbolism. Where as, in my opinion, some of the symbolism, such as the posters which read ‘The World is yours’ and the Grunwalski story contributed to the overall themes of the plot, at other times I was left jarred and confused by the bizarre use of the images (Vinz hallucinating about a cow was hilarious but also very distracting from the rest of the movie)

In conclusion, I thoroughly enjoyed La Haine and would willingly watch it again. If you haven’t seen this movie yet, then I strongly recommend giving it a watch.

What makes a review a good review? This was the question that confronted me in my latest class of Reading and the World of Writing and thus, to see if I could identify these traits, I was challenged with actually reviewing a review (despite how confusing that would seem at first glance). Wanting to have at least some connection to the review I had to examine, I decided to look over a review on the Guardian website by Marcus Sedgwick for the latest book of Terry Prachett called ‘Dodger’.

Sedgwick’s review immediately started to hit all the right points for a good review by being fairly balanced. Whilst his review is positive and Sedgwick commends Prachett’s writing style and general wit, he also concedes that there are some minor factors of the book that do not live up to the rest of the book’s standard (‘Though the plot of the novel is relatively simple’). The language and writing style Sedgwick employs in his review is fairly sophisticated as well, matching the expected tone of what a Guardian reader would be looking for in a review, making it appropriate for the readership of the paper.

Admittedly, Sedgwick does spoil some facts about the book, such as the characters that are encountered and one particular twist involving the name of a character’s pet dog which would have been quite enjoyable to find out for myself should I have ever wanted to read the book myself. However, Sedgwick’s spoilers never stray towards the actual plot, showing that Sedgwick indeed does have some consideration for his readers and their possible interest in the book.

In conclusion, whilst Sedgwick’s review is not perfect, it was still a well crafted and fully thought out analysis of Pratchett’s latest work.

The bleak scene which Chris Woods paints in ‘The Library’ is amazingly well crafted. This is mostly due to the sense of finality and closing which the poem creates through the use of such phrases as ‘shut at seven’ and hard simple adjectives: ‘closed’, ‘simple’ and ‘off’. The ‘lads’ drinking their beer, littering the empty cans on the floor in front of a centre of learning is a truly thought provoking image. The vulgar slur of ‘fuck off’ mentioned in the poem merely adds to the sense of frustration and pessimism Woods creates of a world which has forgotten the importance of knowledge. Woods appears to use this theme of ignorance in his other poems as well, such as ‘Radio Kid’, which he uses in the same vein as other more pessimistic or satire poets, such as Phillip Larkin.

Welcome to WordPress.com! This is your very first post. Click the Edit link to modify or delete it, or start a new post. If you like, use this post to tell readers why you started this blog and what you plan to do with it.